I’m not a big fan of the horror genre. Too much of it is inclined toward trying to creep the reader out through gore; and honestly, as an adult, how often do you read a scene that actually frightens? So when I recently found praise for Robert Aickman’s short stories, I was skeptical. I purchased the ebook version of his Dark Entries collection at random (He has several anthologies available) and was both delighted and astonished by his stories. In this particular volume, the story Ringing the Changes is the closest any writer has come to ever actually frightening me. The mood is one of sheer suspense. Nor would I classify his work as straight horror. True, his stories involve ghosts and the supernatural, but Aickman never considered himself a “horror writer.” Rather, he wrote strange, fantastic tales, unlike anything else. He died in 1981 and I’m really surprised I never ran into his work before now. 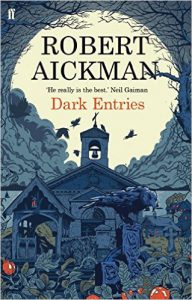 The Green Kingdom by Rachel Maddux

I read this book several years ago, and as I sometimes do, put it aside for possible inclusion in this list, waiting to see if it would “call” to me. Since then, it has indeed done so, and I re-read it in 2018. The author, Rachel Maddux, is more widely known for general fiction rather than genre works, and her novel, A Walk in the Spring Rain, was made into the 1970’s Columbia Pictures movie of the same name. Nor does The Green Kingdom have any fantasy elements other than the Green Kingdom itself, with its exotic plants and animals, but the world-building is very well-done, and the struggles of the five characters who leave civilization to seek it makes for a compelling work. Maddux has much to say about the creative impulse and the trials of both men and women in the 1950’s. But be warned: in many ways, this is not an easy book; the characters often suffer, and through the suffering, grow and change. 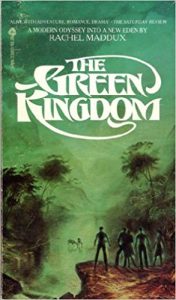 The Gap in the Curtain by John Buchan

John Buchan was an author, a lawyer, an historian, and a politician (including Governor General of Canada in the last years of his life). In his writing career he is perhaps best known for his 1915 spy-thriller, The 39 Steps, which was made into a movie by Alfred Hitchcock in 1935. His work sometimes drifted into the borders of fantasy, and The Gap in the Curtain follows a simple premise to an interesting conclusion. Led by an Einsteinian professor, five characters are able to see a copy of The London Times one year in the future. Through the eyes of the narrator, we follow the resultant reactions of each of the five. This is a fascinating novel depicting the British culture in the aftermath of World War I and our limitations in dealing with a single glimpse ahead. Followers of Downton Abbey may find the book especially interesting. 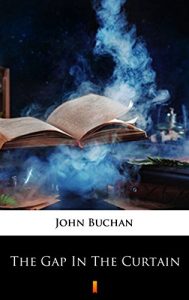 I read The Last Coin a number of years ago, and kept it because I felt it might be worth a re-read. I finally did so recently and feel it deserves a place on my Best Fantasies list. The idea is intriguing: The thirty pieces of silver paid to Judas Iscariot to betray Christ possess world-destroying mystic power. In Blaylock’s novel, Judas was not allowed to hang himself, but was made immortal. In penance, he must insure that the coins are never all brought together in one place, lest the universe end. Andrew Vanbergen is the hero Judas has chosen to stop the evil Pennyman from collecting the coins. Lazy, clueless, with the attention span of a cocker spaniel, Andrew’s only concern is getting his newly-purchased inn and restaurant up and running. The book is quirky, sometimes irritating, and often funny, begging the question: “How do you save the universe when you don’t have the faintest idea what’s going on?” 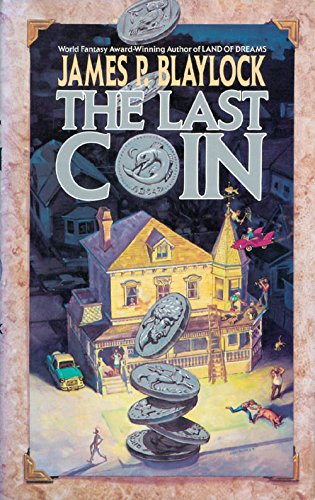 The Incredible Umbrella by Marvin Kaye

Usually, when I read a whimsical or funny novel, I find it lacking in suspense. This is understandable because it’s hard to be both humorous and serious at the same time. To make the stakes high in comedic situations takes a lot of skill, something Marvin Kaye manages to do quite well. Not that this book is riveting the way an action movie can be, but it quickens the pulse enough to where I was honestly concerned about what would happen to the hero.

It has a lot of humor and a nice touch of romance. When Professor J. Adrian Fillmore acquires a magic umbrella that pulls him though realms of Victorian fantasy, alternate universes where Frankenstein, genies, the Gilbert and Sullivan plays, Dracula, and Sherlock Holmes are all real. It’s been compared to Pratt and de Camp’s The Incomplete Enchanter, but I honestly think it’s much better than that. It’s just a fun read. Not being familiar with Gilbert and Sullivan, I didn’t find that part as amusing. It appears near the book’s beginning, but don’t let that put you off.

Kay wrote a sequel called The Amorous Umbrella, but I haven’t read it, so can’t tell you whether it’s too much of a good thing, or as good as the first book. The novels are apparently both out of print, but used copies can be found at a reasonable price. 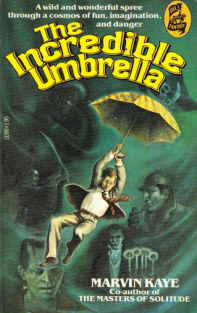 When the Birds Fly South by Stanton A. Coblentz

In 1884, H. Rider Haggard’s book, King Solomon’s Mines, created the “Lost Race” novel, an enormously popular sub-genre driven by that century’s public fascination with its numerous archeological finds. Tons of novels followed in which a party of explorers led by a handsome, fearless hero, encounters a hidden civilization, always containing a beautiful woman. The hero and the woman fall in love; the bad guys plot villainy; the hero gets the girl in the end. Writers such as Edgar Rice Burroughs, A. Merritt, and Robert E. Howard all used variations to considerable success. (King Solomon’s Mines would later inspire a little movie called The Raiders of the Lost Ark.)

I had heard of When the Birds Fly South (1945) for a number of years, but had avoided reading it, thinking it would be too similar to other lost race novels. I tried it this week and thoroughly enjoyed it. The writing style is lovely; the main character, rather than a superman, is flawed and very human. The gigantic image of the goddess, Yulada, is used to excellent effect. I don’t want to say too much and give away the story. I came away from the book contemplating the difference between men and women more than the difference between two races. Sadly, this book is out of print. If you buy the 1980 Newcastle paperback edition, don’t read the author’s introduction, which contains spoilers. 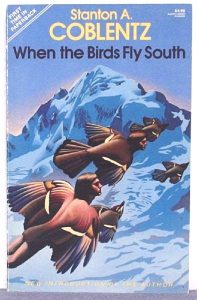 The Light at the Edge of the World and Other Stories by L. M. Merrington

I ran across this book in a random search. If you’re looking for furious action, this isn’t the book for you, but if you enjoy traveling through a magical kingdom filled with fun concepts, you might enjoy it. It’s actually a series of short stories using a simple, clever device: in each story the main character meets someone, who then becomes the main character in the next story. In every story, there are always leisurely travel descriptions, nor is this a book based on magical “systems.” The magic is that of fairy tales, unexplained and wondrous. In many ways, it reminds me of reading Tolkien’s Hobbit, back when I was fourteen–it has the feel of older books such as those by George MacDonald or Hope Mirrlees.

I wouldn’t hesitate to recommend it to a young adult or an older grade school student, but it meets the criteria of good children’s literature: good enough to be enjoyed by adults. I look forward to reading more by the author. 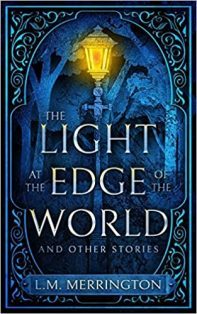 Awake in the Night Land by John C. Wright

I meant to read this for some time. I didn’t realize what I was missing. It consists of four short works that are arguably the best stories based on William Hope Hodgson’s Night Land that have been written. In my opinion, the sheer suspense Wright brings to these tales exceeds even the original. Nor does Wright neglect the topic of sacrificial love, whether for a friend or a lover. I will warn you that the final story requires a careful reading, as Wright’s characters debate the meaning of life, death, and existence. You’ll probably disagree with some of the points he makes, because the author doesn’t create “straw men;” arguments from various sides are all equally represented. But I’m making this sound dull, which it isn’t. It is a book of wonders. 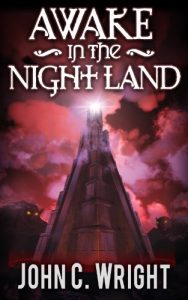 Bridge of Birds by Barry Hughart

I read this book a few years ago and debated including it in my list. Since that time I’ve had more than one email suggesting its inclusion. It belongs to a class of novels set in a mythic ancient China, somewhat similar to Ernest Bramah’s Kai Lung Unrolls His Mat. However, this is a far more entertaining book, written in ironic prose filled with sly humor, as Number Ten Ox and Li Kao go on a quest to find the Great Root of Power to cure an illness afflicting the children in Ox’s village. Much mayhem unfolds, all of it a lot of fun. 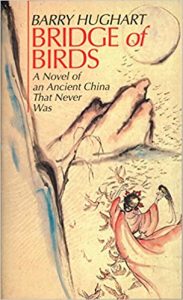 Listing this is a bit odd. I listened to it on an audio book checked out from the local library, only to discover after finishing that it was an abridged version. So, at this time, I can only say that the version I heard was an absolute masterpiece of mood and suspense. I’ve since purchased the print version and intend to reread it soon. (Lately, I’ve noticed it sometimes seems to call to me from my bookcase.) The Mystery of Edwin Drood is a novel Charles Dickens left unfinished at his death. I haven’t read it. Simmons doesn’t attempt to finish Dicken’s book but instead tells a gripping story from the perspective of writer Wilkie Collins, Dickens’ real-life contemporary. The novel is filled with mystery, murder, and traipses through graveyards and underground passages. The villain is relentless; everything, including what is real, is in question. At times, it felt as if I had stepped into a book by Rider Haggard, or wandered into the universe of Raiders of the Lost Ark. The writing reflects the style of Dickens’ day. I haven’t read anything quite this good in years. 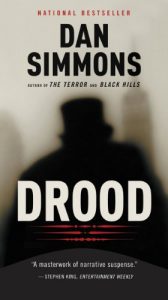 The Treasure of the Isle of Mist by W. W. Tarn

Tarn was a scholar who told this tale to his fifteen-year-old daughter when she was ill. It’s one of those books that’s difficult to describe. On the surface, its a story of two children, Fiona, the heroine, and the Urchin, her male playmate, a quest to find a treasure hidden on the Isle of Mist. But it’s much more than that. Charming, erudite, filled with a quiet wisdom, it’s simply a delight to read. Editions are available on Amazon or can be downloaded for free from gutenberg.org 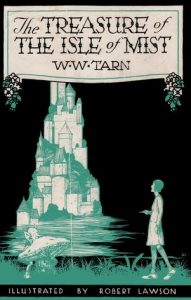 If you’ve come this far and have been counting, you probably realize that I’ve only listed about 75 books. This leaves room for more reading. If you know of a book that you feel deserves to be on the list, please let me know. I’d love to read it and include it here