This article first appeared in the Winter 1995 issue #26 of Marion Zimmer Bradley’s Fantasy Magazine and is Copyright 1994 by James Stoddard.

For those of us who grew up in the late 60s and early 70s the years between 1969 and 1974 were the golden years in fantasy literature. It was during this six year period that Ballantine Books, under the auspices of Editorial Consultant Lin Carter, introduced the “Sign of the Unicorn” line of Adult Fantasy books, a series which was to publish some of the finest fantasy ever written. Although the series was based on the success of Tolkien’s Lord of the Rings, most of the books were classics predating Tolkien and owing nothing to his influence. At that time, under the ownership of Ian and Betty Ballantine, Ballantine Books seemed more like a quality, niche-marketing house than a mass marketer. A deep love of books pervaded their titles.

I was fourteen when my high school English teacher handed out an order form containing, among other books, The Hobbit and The Lord of the Rings. I had heard they were good, so I ordered all four volumes on a chance. Four dollars was not an insignificant sum in those days, but I had scarcely left Bag End with Bilbo before I knew I was on to Something Big.

At the back of the Tolkien books was a modest request form for Ballantine’s catalog of current titles. As memory serves, the catalog turned out to be a 9 by 12 inch, glossy, first-class brochure with pictures of the book covers in black and white. Soon I was ordering titles through the mail and searching for them in local bookstores.

Throughout each book, Lin Carter served as host and guide. He was much more than just the Consulting Editor of the titles. Drawing on his extensive reading of fantasy literature, he chose works of beauty and power and grace that burned into my young heart. Because of his enthusiasm, his spirited introductions became very much part of my reading experience. Although I never met him, never exchanged correspondence or heard him speak, he became my friend and my mentor, a man who understood a literature that was very important to me. It was as if we were two long acquaintances, the older and the younger, he pointing here and there saying: “Have you seen this? Did you notice that? Now, look here.” 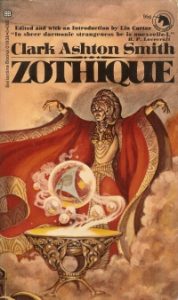 Together we saw it all. I remember as Lin and I climbed onto the back of a reptilian shrowk to fly above the mountains of the Ifdawn Marest with Maskull and the wild and beautiful Oceaxe in David Lindsay’s A Voyage to Arcturus. Or when we stood by the cairn with Rhiannon in the world of The Mabinogion, the Welsh Iliad, through the works of Evangeline Walton, a quartet of books beginning with Prince of Annwn. Parched with thirst, Lin and I crossed the burning deserts of the dying continent Zothique and stood frozen in fear with Ralibar Vooz in the caves of Hyperborea with Clark Ashton Smith. We crept down the seven hundred onyx steps and beyond the Gates of Deeper Slumber with H.P. Lovecraft in The Dream Quest of Unknown Kadath. We eyed one another in silent awe as we fled from the descending Powers of Evil, through the Utter Darkness toward the safety of the towering Great Redoubt of William Hope Hodgson’s The Night Land, that bizarre and beautifully flawed story of an earth whose sun has died. Swords in hand, we fought the bloody manticore upon Koshtra Pivrarcha with Lord Juss and Lord Brandoch Daha in E. R. Eddison’s The Worm Ouroboros, a work written with power and elegance in archaic English. 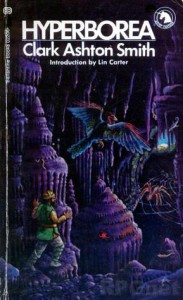 Exhausted, heads spinning, panting, we threw ourselves down to rest. But after a moment Lin and I looked at each other and nodded. He smiled and said, “Let’s do it all again.” I would have followed him anywhere.

We slipped past the Pool of the Blue Flamingo through the Gate of Khoire in Hannes Bok’s Beyond the Golden Stair. We crossed into Faery itself with Alveric to win the heart of the Princess Lirazel in The King of Elfland’s Daughter, with Lord Dunsany, possibly the greatest writer of prose in the English language. We crossed those borders again, this time through Dreamland with C. S. Lewis’ old mentor, the Scotsman George MacDonald in Phantastes and in Lilith.

We trod the dusty roads to Utterbol to The Well at the World’s End with a genuine Renaissance man in both the arts and literature, William Morris, who might well be called the father of modern fantasy. Lin and I donned masks and gave chase through the streets of turn-of-the- century London in G. K. Chesterton’s farcical The Man Who was Thursday and pondered detective’s mysteries in Arthur Machen’s The Three Impostors. We traveled to the East, in George Merideth’s seductive oriental fantasy The Shaving of Shagpat, where I held the hair, while Lin wielded the scissors. We bottled genies in F. Marion Crawford’s Khaled, saw the gates of Hell itself in William Beckford’s bejeweled Vathek, and sat by the roadside in China to watch the great oriental storyteller, Kai Lung himself, unroll his mat and spin his tales in Ernest Bramah’s Kai Lung’s Golden Hours.

In works of Lin’s own, such as Tolkien: A Look Behind the Lord of the Rings, we sat down for a fireside chat to discuss the making and origins of fantasy. Imaginary Worlds should be a textbook for all fantasy writers everywhere, as it traces the origins and essentials of creating a full-blown fantasy world.

When new writers finally began to surface, Lin brought me the book I consider one of the greatest fantasies of all time, Red Moon and Black Mountain, by Joy Chant. It is nothing less than a masterpiece.

Katherine Kurtz, writer of the popular Dernyi books, also received her start in the Sign of the Unicorn series.

The look of the series was as distinctive as the works themselves due to the wonderful, abstract wrap-around covers commissioned by Ian and Betty Ballantine. Three principal artists did most of the work on the series: Gervasio Gallardo, whose most striking cover was that of A Fine and Private Place by Peter Beagle; Robert LoGrippo, whose distinctive mosaic style decorated The Night Land, The Three Imposters and his best work of all, The Boats of the Glen Carrig, by William Hope Hodgson, a beautiful mosaic of men facing unimaginable terrors at sea; and my favorite artist, Bob Pepper, who was working with dyes at that time.

Mr. Pepper created the three extraordinary covers for the Gormenghast books, which laid side by side represent a single painting. He also painted the covers for many of the James Branch Cabell books, for Poul Anderson’s Hrolf Kraki’s Saga, Dunsany’s Don Rodriguez; and rendered the darkly beautiful work on Red Moon and Black Mountain. His best illustration must surely be for The King of Elfland’s Daughter. With its colorful, bright dyes, ivory-skinned figures and the white unicorn rearing its head onto the solid black background, it is a magnificent cover.

I do not know what economic conditions caused the Adult Fantasy series to end. I know my disappointment was bitter. After Ballantine Books was purchased by Random House, Lin Carter edited a yearly fantasy anthology for DAW books for six years, then I lost track of him. I remember standing in a bookstore browsing through a copy of The Official Price Guide to Science Fiction and Fantasy by Don and Maggie Thompson when I saw Lin’s name, with the date of his death below. My face went pale with shock and grief. The friend I never knew was dead, passed away almost two years before. I stood in that strange, sudden loss one can only feel for someone who’s words touched them only through the printed page. I had never expressed my appreciation for his work. I had not even known the day he died.

From this web site I discovered he died alone. I regret that. If I could somehow go back in time, I would hurry to the hospital, to tell my old friend and mentor goodbye.