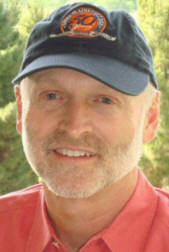 James Stoddard loves reading mythology, fantasy, and anything else he has time for. He also enjoys playing the guitar and keyboards, and writing and recording songs. His short stories have appeared in well-known science fiction publications such as Amazing Stories and The Magazine of Fantasy and Science Fiction.  His science fiction story, The Battle of York, was included in The Year’s Best SF 10, published by Eos Books, and his fantasy story, The First Editions, was included in the 2009 edition of The Year’s Best Fantasy 9 from Tor. His novel, The High House, won the Compton Crook Award for best fantasy by a new novelist, landed in the Locus top ten for best SF/Fantasy book of the year, and made the short list for several other awards. In 2018 he was asked to be one of the judges of the prestigious Phillip K. Dick awards.

He was born in Liberal, Kansas, and raised near the small town of Turpin in the Oklahoma Panhandle, the narrow portion of the state 35 miles by 168 miles, once called No Man’s Land in pioneer days. He lived in one of two houses provided by the company at a Shamrock Gasoline Terminal, where tanker-trucks came to fill with fuel for gas stations. His father was the terminal manager. His mother, a cosmetologist during early adulthood, was a homemaker.

Being raised at the Terminal, with its warehouse, loading rack, office, vast tanks for storing fuel, and yards of winding pipelines was a grand adventure for James and his two older brothers, and theirs was mostly a happy childhood. He attended Turpin schools through all twelve grades, graduating with a class of 24 students.

He attended Southwestern Oklahoma State University, receiving a Bachelor’s Degree in Business Administration. He worked briefly as a bill collector for Beneficial Finance, as an Assistant Manager at Karl’s Toys in Newport Beach, California, and as an Assistant Manager at a Gibson’s Discount Center in Weatherford, Oklahoma. He soon took a job as Business Manager for a small school in West Texas, where he worked for nine years, during which time he obtained a degree in Recording Technology at South Plains College. Resigning his position as Business Manager, he began teaching sound recording at the college, where he achieved a rank of Professor. His students work all across the country, in recording studies, in the film and gaming industry, as musicians, or running sound for bands.

In 1995, he received a Masters in Liberal Studies from Oklahoma University, with an emphasis on archeology, English, and ancient mythology. The title of his thesis: The Ballantine Books “Sign of the Unicorn” Adult Fantasy Series (1969-1974), suggests that Stoddard holds a Masters in Fantasy.

In 2015 he resigned his position to write full time.

He and his wife live in a Victorian home in a winding canyon in West Texas.